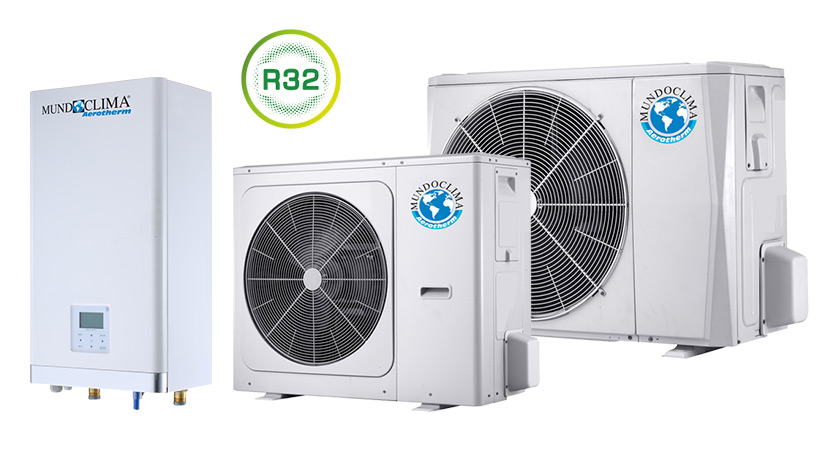 Mundoclima Aerotherm V10 range is available in a Bibloc version with up to A+++ energy labeling, being the equipment with the highest performance and energy efficiency, contributing significantly at minimizing environmental impact.

R32 is the gas that complies with the environmental regulations created to not only protect the ozone layer, but also to reduce the greenhouse effect and environmental pollution. All models are preloaded to service a refrigeration distance of up to 15 meters, respecting the 1.84 kg limit.

Mundoclima Aerotherm v10 improves its SCOP14825 with values above 6. The Mundoclima Aerotherm units consist of a compressor, fan and Inverter pump, which contributes to a higher efficiency at partial loads, additionally ensures a more sensitive and effective control.

The Mundoclima Aerotherm heat pump can meet all your installation needs, from cooling and heating to Domestic Hot Water (DHW). All of this whilst having installation flexibility, be it radiant floor heating, fan coils or radiators, and featuring a room thermostat in its control panel.

The entire Mundoclima Aerotherm series from 4kW to 16 kW is offered with the new single-fan models, thus reducing the size and space required for these new Aerotherm. The indoor unit, on the other hand, also has reduced dimensions, it has a depth of only 270 mm and incorporates a built-in control panel in its body.

The recirculating pump included in the Aerotherm is of variable speed, adapting to installation needs and changes, and rewarding consumption reduction.