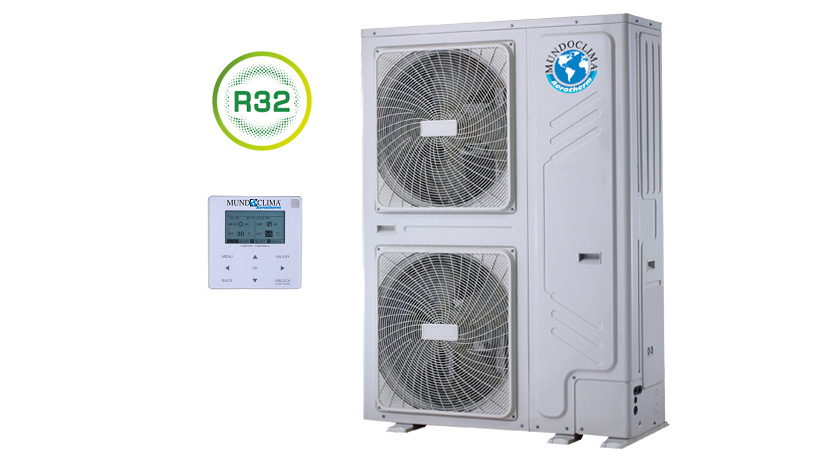 Mundoclima Aerotherm V10 range is available in a High Efficiency Monobloc version with up to A+++ energy labeling, being the equipment with the highest performance and energy efficiency, contributing significantly at minimizing environmental impact and covering a wider range of powers and applications.

When compared to the 2088 GWP of R-410A, the R32 refrigerant has a Global Warming Potential (GWP) of 675, thus complying with environmental regulations aimed at protecting the ozone layer, reducing the greenhouse effect and environmental pollution.

Mundoclima Aerotherm v10 improves its SCOP14825 with values above 5’5. The Mundoclima Aerotherm units feature a compressor, fan and Inverter pump, which contributes to a higher efficiency at partial loads, additionally ensures a more sensitive and effective control.

The Mundoclima Aerotherm heat pump can meet all your installation needs, from cooling and heating to Domestic Hot Water (DHW). All of this whilst having installation flexibility, be it radiant floor heating, fan coils or radiators.

The control panel includes a room temperature thermostat, allowing the Aerotherm to be controlled according to room temperature without the need for any optional extras, making it even easier to use.

This new family covers a wider range of powers, reaching 10 times higher powers. It goes from the common range of 4 – 16 kW to 4 – 30 kW in a single unit, and with the possibility of a multiple system of up to 6 units (180 kW).